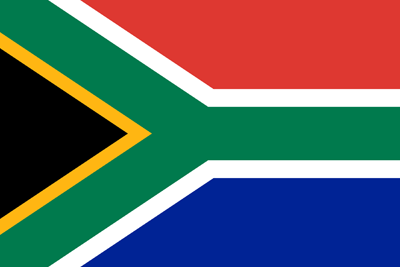 The Minister of Trade and Industry, Mr Ebrahim Patel has announced that all businesses that will be allowed to provide essential services are required to seek approval from the Department of Trade, Industry and Competition (the dtic)  in order for them to trade during the period of the lockdown in terms of the regulations published today by the Minister of Cooperative Governance and Traditional Affairs, Ms Nkosazana Dlamini-Zuma in Regulation Gazette No. 11062

Such businesses are required to apply to the Companies and Intellectual Property Commission (CIPC) Bizportal website at www.bizportal.gov.za and obtain a certificate from the Commission that allows them to continue trading. The Bizportal website will contain a menu icon listed as “Essential Service Businesses” through which an application can be made to the CIPC.

The application will be a simple declaration requiring minimal registration details, type of business/trade involved in, what trading name if any is used an d whether it meets the requirements contained in the essential services list, the contact details of the person applying as well as the number of employees that will be working during the lockdown period.

See below the links to the regulations and permit form.

The CIPC registry will then pre-populate the remaining company information and email a certificate stating that the business is allowed to remain trading.

The certificate can then be used as evidence to authorities requiring same that indeed the business has been given government permission to trade and that its employees are able to have unrestricted movement ONLY in the course of that trade.

It should be stressed and noted that if you make a false application to the CIPC, and are indeed not an essential service as per the government regulations, such will be taken as a fraudulent application and will render yourself as applicant liable to criminal prosecution and sanction.

This service will be available from this morning, 26 March 2020 at the start of business trading hours. 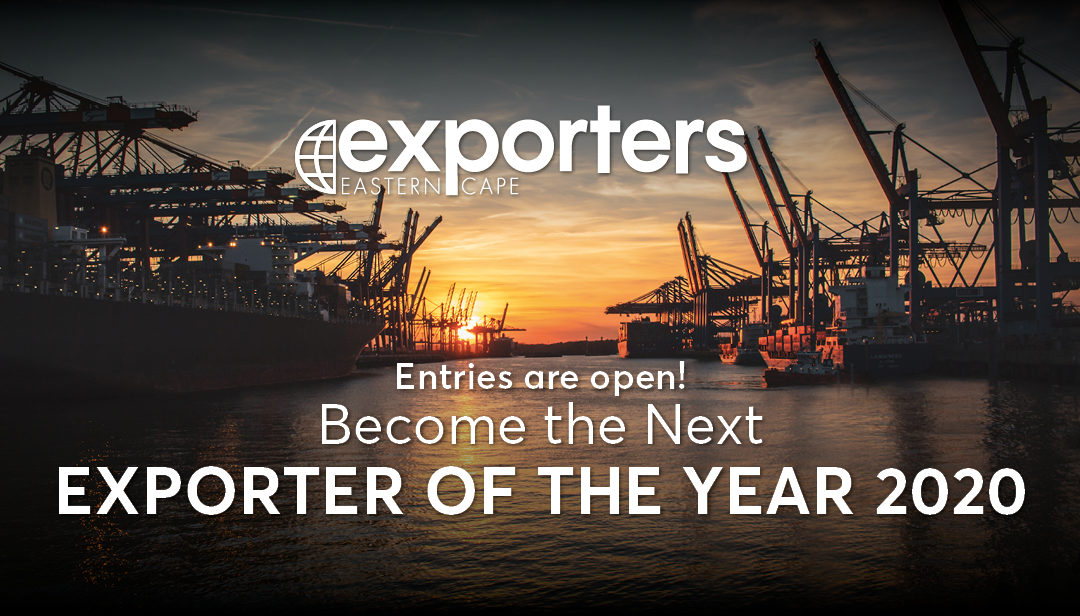 The Exporter of the Year Awards honours and acknowledges exporters and service providers to industry who have excelled in the period under review.

Exporters Eastern Cape chairman Quintin Levey encouraged everyone to enter. “If you do not enter you cannot win. Tell your friends to enter, and their friends to enter,” Levey said. He went on to add that judging all entries is a thorough and robust task. “Judging criteria include qualitative and quantitative and all judges are independent from the exporters,” Levey said.

The value of winning an Exporters Eastern Cape Exporter of the Year Award had a wide range of meanings to the diverse group of top exporters in the Eastern Cape in 2019. However, one thing was certain – they would recommend participation in the awards to all exporters.

From building morale through tough times, to being recognised by peers and staff, some of the category winners shared the impact of winning the awards had on their companies.

The winner in the category Best Exporter: Small Business in 2019, was S4 Integration and according to S4 Integration New Business Development Manager Ettienne Gerwel winning the award had an amazing impact on the business.

“Congratulations to all of the other winners and I would encourage exporters to enter again next year. We have one goal and that is to take the Eastern Cape to the world, and therefore we are all winners as members of Exporters Eastern Cape,” said Gerwel.

The winner of the SJM Flex Environmental Practice Award and Merit Award Winner in the category Best Exporter: Small Business was La Mohair. La Mohair Owner Larissa Primmer said the award meant a lot to her company during a challenging year because of the effect of the drought on the production of mohair. The company, which employs 10 permanent workers, exports 95% of its mohair products.

“Thank you to the Exporters Eastern Cape for acknowledging us with the award, the informative sessions as well as the networking opportunities,” said Primmer.

The Winner of the SJM Flex Environmental Award, the IDC Job Creation Award and Merit Award Winner in the Best Exporter: OEM category was Ford Motor Company of Southern Africa.

“Going forward all I can say is watch this space. We plan to build 250 000 vehicles in the next two years. The Eastern Cape is a major hub of the automotive sector and we will continue with our outreach programmes in the region. We want to thank Exporters Eastern Cape for the opportunity given to us with this award,” said Brooks.

Winner of the Best Provider of Services to Exporters was Sasfin Commercial Solutions (Global Trade).

Sasfin Commercial Solutions (Global Trade) National Manager Brenden Adriaanzen said the excitement of winning the award was amazing – especially the Monday morning following the awards ceremony back at the office, when all 52 staff members celebrated the award.

“It was such a proud feeling, since the award belongs to everyone. We received letters of congratulations from all over and the award was also wonderful free advertising and marketing,” said Adriaanzen.

Exporter of the Year Categories:

Judging all entries is a thorough and robust task. Judging criteria include qualitative and quantitative and all judges are independent from the exporters.

Please refer to the judging criteria scorecard when completing your entry form, as this should guide you in the amount of information required in each area of the entry form.

The judges scoring on the quantitative information will be performed in terms a matrix, to ensure consistent scoring for these factors from all the judges.

If you would like to partner with Exporters Eastern Cape in hosting the prestigious Awards Evening contact Suzanne Vermeulen at info@exportersec.co.za or at 083 291 5214.

The Annual Exporter of the Year 2020 Banquet will take place on Friday, 14 August 2020 at the Boardwalk International Convention Centre.

Contact the Branch Coordinator, Suzanne Vermeulen on info@exportersec.co.za or the Chairman, Quintin Levey on 083 489 2232  if you have any questions.

WATCH NOW: Tips on How to Complete the Entry Form! 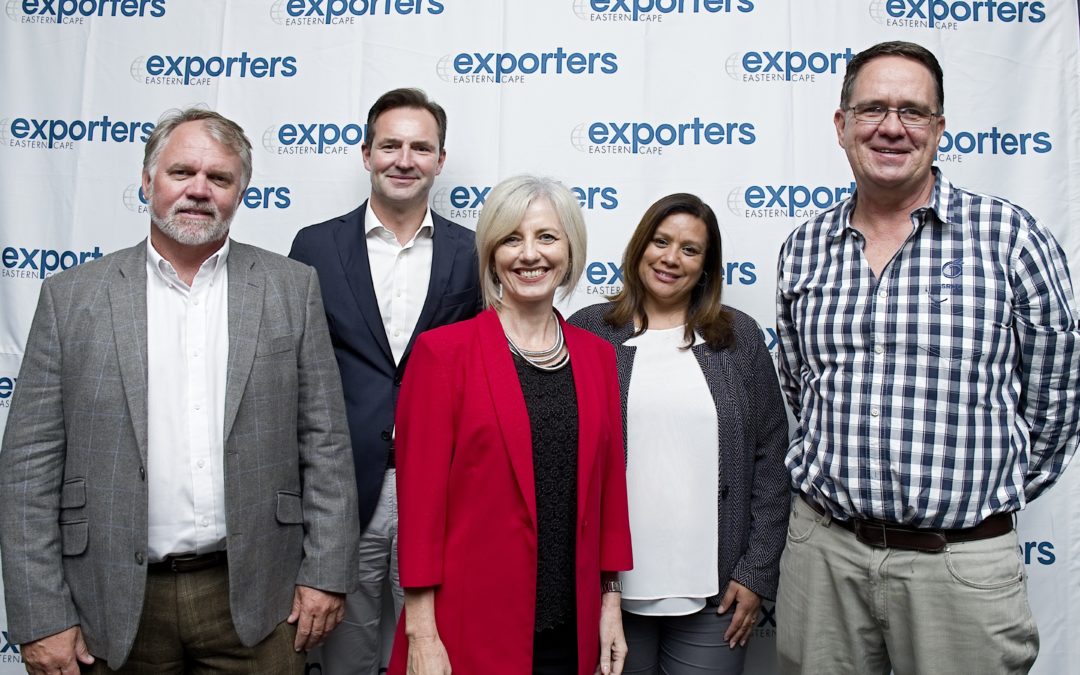 Despite a range of challenges – from the coronavirus to a threatening downgrade – exporters in the Eastern Cape have experienced growth in the agricultural and automotive sectors over the past year.

During the Exporters Eastern Cape Export Growth Panel Discussion hosted on Wednesday, 4 March 2020 at Radisson Blu Hotel in Port Elizabeth, panellists shared the encouraging sentiment that, despite the recessionary climate in South Africa and other global challenges, they remained resilient and experienced growth.

“VWSA had the best year of its existence, really. In terms of production numbers, the highest number we ever produced was achieved. We also achieved amazing market share – I think it’s the third highest market share ever achieved in the country, so we are very happy. The results are great, and we are pushing further for this year, which probably is going to be challenging but we look at it as an opportunity,” said Schaefer.

Schaefer also said there was unbelievable opportunities in Africa and that many African countries were ahead of South Africa in terms of infrastructure and political will. He stressed the importance of creating a regional market for the automotive industry in Africa.

Hannes De Waal, Managing Director of Sundays River Citrus Company, said the South African fruit industry in the last decade had also grown in leaps and bounds, despite the recent drought, climate change and other challenges.

“This is all thanks to new market access opening up in Asia and Eastern Europe. In 2009 the South African citrus industry exported 85 million cartons. Now we are on 130 million and if it wasn’t for the drought, we would have been on a 150 million cartons.”

“We have had wonderful growth in the last decade, there is still opportunities and markets which we can penetrate more. We are quite confident that the growth we see will continue. Our industry is really well position as far as export throughout the globe goes, so we are very positive about it,” said De Waal.

De Waal added that the local citrus industry was not significantly impacted by the coronavirus to date, however, rather than panicking most industries are asking suppliers to do risk assessment.

Paul Lynch, Director of South African Wool & Mohair Buyers’ Association (SAWAMBA), said the coronavirus had also not impacted the wool industry despite its biggest markets being in the East.

“Between 75% to 80% of South Africa’s wool gets exported to China, and we are still waiting to see if prices will drop. At the moment, however, there is rather an increase in the price of wool. We are also fortunate that there are other markets that can absorb our wool, including the Czechoslovakia Republic,” said Lynch.

Lynch said even during the recent challenging times of the Foot-and-mouth-disease outbreak, when South Africa could not export certain animals and animal-products for several months, the wool market dropped only marginally. “We worked on diversifying the market and got through it, due to our strong client relationships,” said Lynch.

Lauren Goddard, Regional Country Sales Manager of Expeditors International, said in the logistics and freight forwarding sector shipments continue to flow and get out of the harbours despite the coronavirus, and many factories are starting up again in China.

“However, we are experiencing port congestion, and capacity has been challenged, particularly in getting containers out of export depots. There is about two- to three-week delays of raw materials. Due to the knock-on effect with port congestion and the bottleneck in China, we need to think ahead on how this will affect our supply chain,” said Goddard. 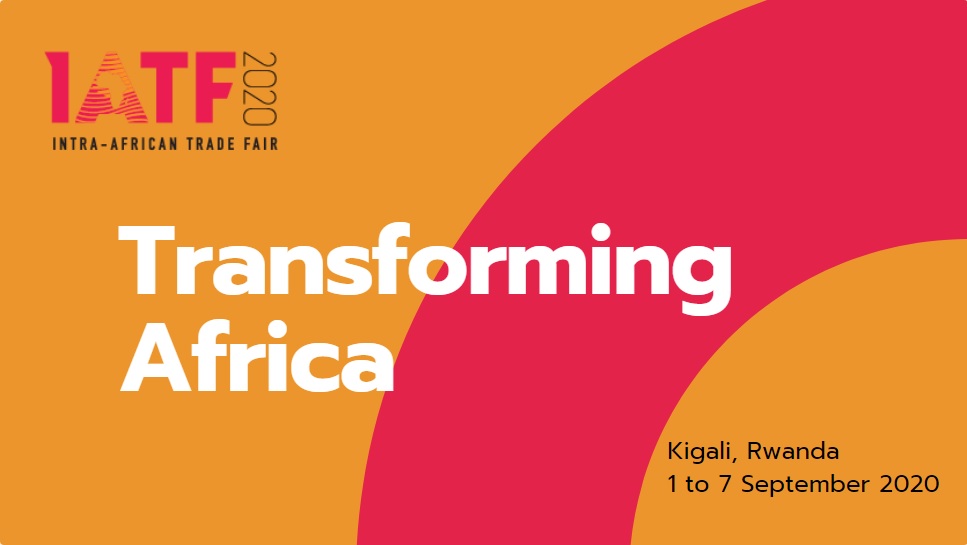 South Africa’s President, Mr Cyril Ramaphosa now Chairs the AU so the dti wants to have a massive presence as this year’s IATF in Rwanda, where the Department will be hosting a National Pavilion. Minister Patel will be attending and the Dti hopes the President will too – so showcasing South Africa’s large and dynamic companies would be part of the Dti’s value proposition at the event.

Below please find an invitation to the 2nd Intra-African Trade Fair 2020 which is scheduled to take place from 1 to 7 September 2020 in Kigali, Rwanda.

The deadline date for the submission of complete National Pavilion application forms to the Dti is 2 April 2020. 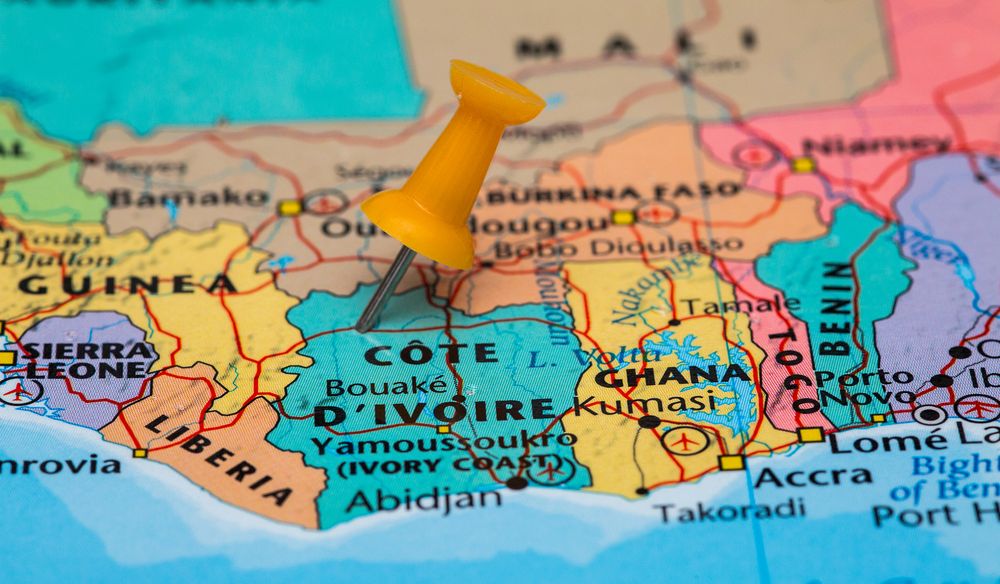 ECDC and Wesgro will lead a Trade mission to Cote D’Ivoire and Guinea from 19-24 April 2020. Please assist and share with your companies.

Please note that it’s a cost sharing mission and companies are required to cover their own flights while ECDC covers the costs of accommodation, local transportation, b2b meetings, interpreters and conferencing in Cote D’Ivoire and Guinea.

Please complete the attached participation form and return to llubengu@ecdc.co.za to secure your participation. For  more information please do not hesitate to call 043-704 5711 / 083 396 3775.