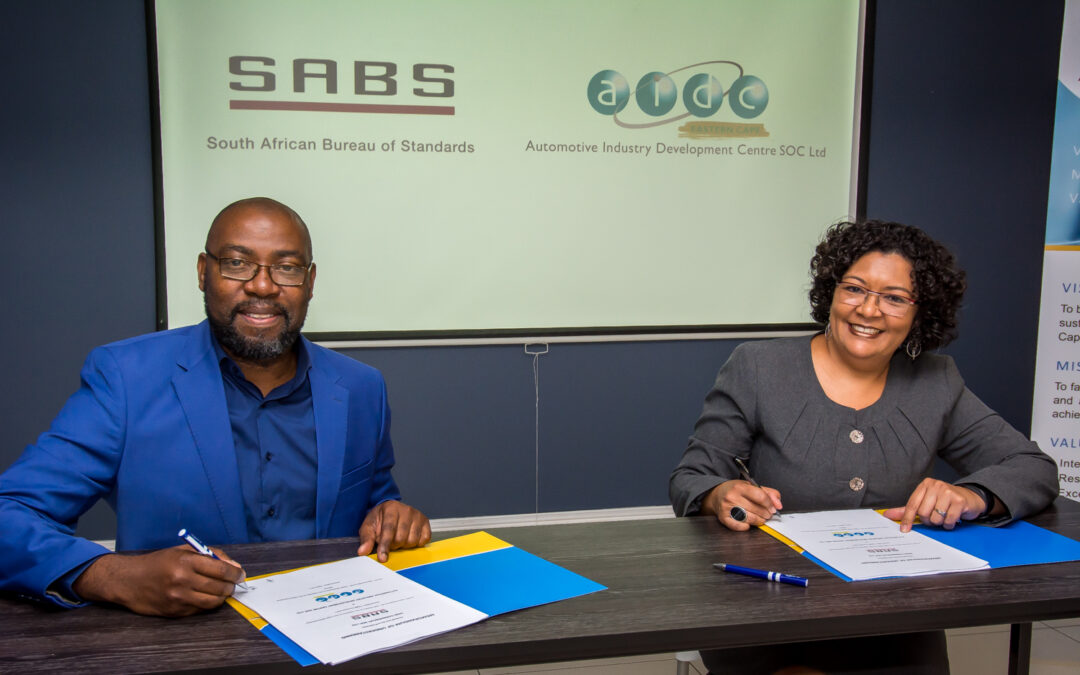 As part of its strategy to position the automotive supply chain for growth and innovation, particularly electric vehicle technology, the AIDC Eastern Cape has signed an MOU with the South African Bureau of Standards.

In terms of the agreement, the organisations will collaborate and synergise resources with a vision to establish the Eastern Cape automotive manufacturing hub as a continental centre of excellence strengthening and supporting the South African Automotive masterplan pillar of regional integration.

“Automotive production is in the process of radical and accelerated change driven by technology and alternate energy.  As South Africa’s automotive volumes are driven by export demand predominantly, the country and the Eastern Cape which is South Africa’s most prolific vehicle exporter, are highly vulnerable to changes in demand in these export markets – currently mostly Europe,’’ Shenxane said.

“Commitments by countries, including South Africa, to zero carbon emissions means that within a very short time-period (within three to five years) South Africa’s traditional markets will demand EV vehicles only which means we need to be making significant investments in innovation and EV technology,“ he says. The AIDC EC believes that its work in synergising resources and strategies of South Africa’s automotive role-players is central to enabling this.  The MOU with SABS, which centres around EVs, is a case in point.

The MOU identifies several joint projects including a collaborative programme with other world-class Eastern Cape-based institutions to identify and implement projects within the EV value chain contributing to the transition of the automotive sector in South Africa, including standards.

Jodi Scholtz, Lead Administrator at SABS added that ‘SABS is excited about this partnership with AIDC EC as it forms a critical component of our turnaround strategy to identify new areas of growth.’

Also envisioned is the enhancement of the SABS testing facility in East London to ensure continued support to the automotive industry and its establishment as a Centre of Excellence.

Scholtz further added that ‘the facility will enhance its testing capacity and capability to ensure alignment to the current and future requirements of the industry. The outcomes of COP26 will also have a major impact on future standards from a sustainability perspective.’

AIDC EC & SABS have identified a number of joint projects which include repurposing the available buildings at the SABS East London facility to serve as an automotive incubator, which is intended to complement current services and expand to future services in the EV and related technology space.