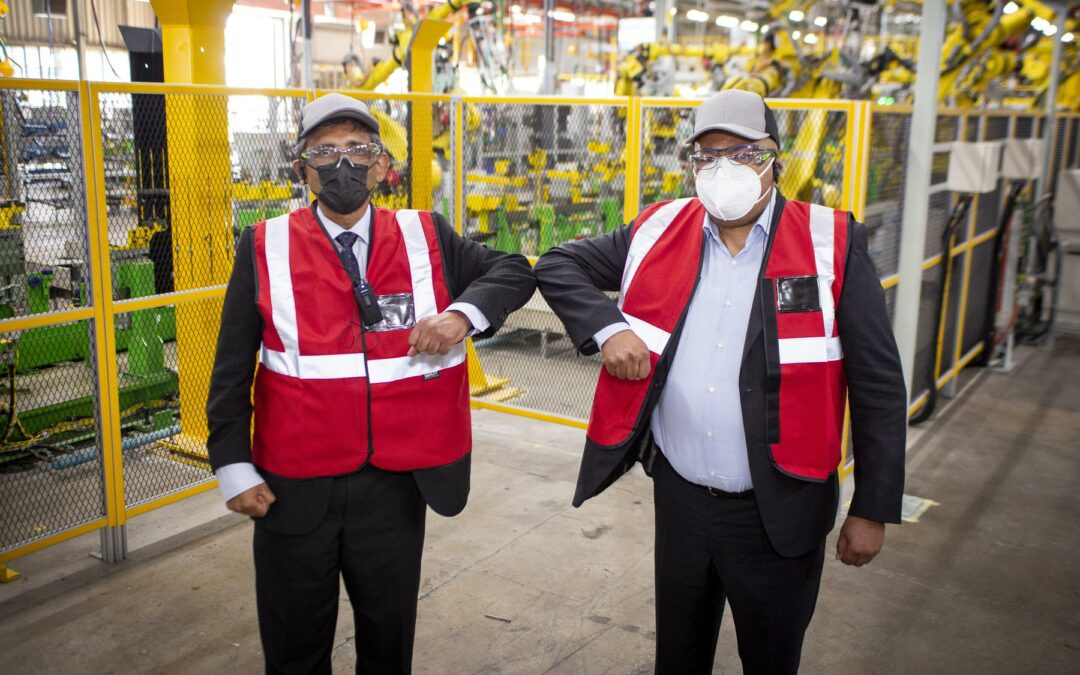 Isuzu Motors South Africa welcomed a high-ranking government delegation on the 25th of October, led by the Minister of Trade, Industry and Competition (dtic), Ebrahim Patel.

During the Minister’s courtesy visit to the Eastern Cape vehicle manufacturer’s production facilities in Struandale, Gqeberha, the Minister met with President and CEO, Billy Tom and Isuzu senior leadership to discuss key priorities relating to the business.

Patel previously visited Isuzu in 2019, shortly before an announcement that Isuzu would be investing R1.2-billion into its next generation bakkie programme in South Africa for the South African and Sub-Saharan Africa markets. The decision resulted in the security of 1,000 jobs directly at Isuzu’s operations in Gqeberha and across its national and international dealer network, as well as around 25,000 jobs at hundreds of suppliers across the country.

Tom updated the ministerial delegation on the progress made on the investment, including manufacturing plant upgrades to meet the new vehicle requirements and the state of readiness to launch exciting new Isuzu products into the market. The new Isuzu D-MAX bakkie will be launched early next year, and 2022 will also see the launch of Isuzu’s next generation trucks – all locally manufactured in Gqeberha.

Extensive building has taken place over the past two years to ready the production facilities for the brand-new Isuzu light commercial and heavy commercial vehicles. The investment also involves significant upgrades to tooling and equipment, as well as refurbishing the current line to support an extension in the manufacturing of current Isuzu models. In addition to the upskilling and training of staff, Isuzu has also embarked on rigorous testing of vehicles to ensure Isuzu’s promise of producing durable, reliable and capable vehicles reengineered for African driving conditions.

“Our focus remains on being able to ensure the sustainability of Isuzu’s operations in South Africa. We are committed to transformation and believe that an inclusive economy is the foundation to economic prosperity for all citizens,” said Tom.

In September Isuzu announced it had maintained an automotive industry-leading level one in its Broad-Based Black Economic Empowerment audit for a second consecutive year.

“We ascribe to the 2035 vision of the South Africa Automotive Masterplan to be a globally competitive and transformed industry that actively contributes to the sustainable development of South Africa’s productive economy,” he concluded.

While no jobs at Isuzu Motors South Africa were lost during the pandemic in 2020 as a result of adjusted shifts, four-day work weeks and a salary freeze for management, Tom said he was looking forward to pre-COVID economic growth in the country. In 2019, the automotive industry contributed approximately 7% to South Africa’s GDP, supporting more than 100 000 jobs.

Isuzu grew its market share on the D-MAX bakkie in 2020/ 2021 and maintained the number one position for market share with its N and F-Series trucks in the South African market.