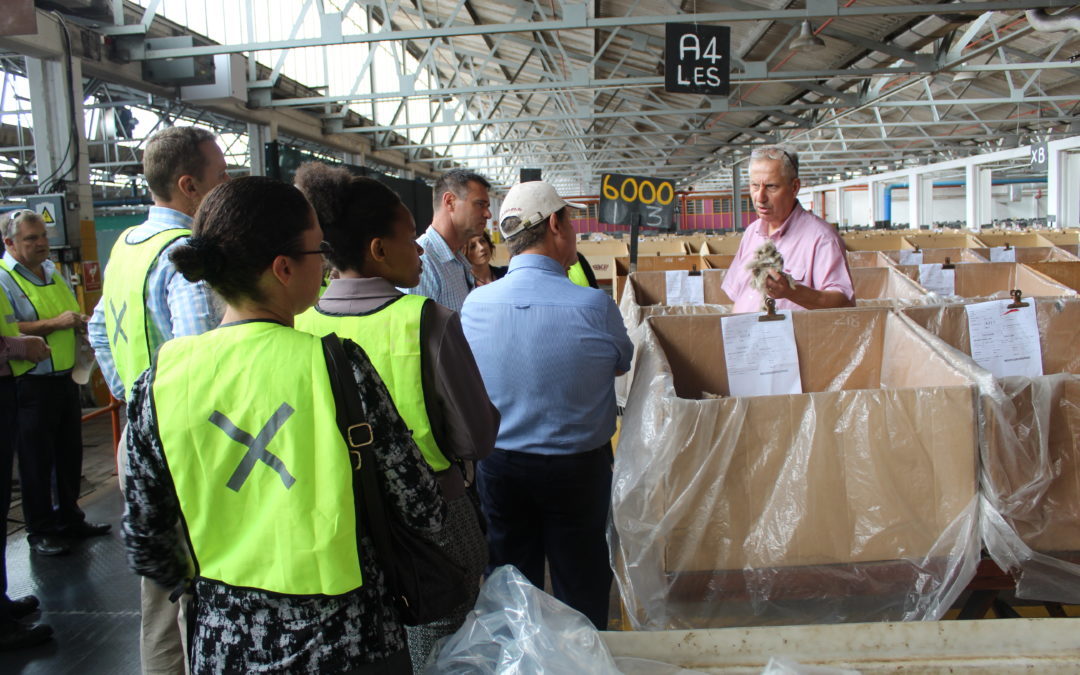 MEMBERS of Exporters Eastern Cape were treated to a rare glimpse into the mechanics of global wool trade when they attended an Exporters EC Site Tour of BKB’s head office in North End, Port Elizabeth, on Thursday, 25 October.

BKB, a proud member of Exporters EC, is regarded as a leading player in the South African agricultural sector, with a focus on Wool and Mohair Brokerage Services as well as Livestock, Auctioneering and Sales.

While it takes a full year to grow enough wool on 40 sheep to make up just one bale, the BKB head office in North End is far removed from the slow-pace of a sheep’s country life; as the multi-story warehouse is a hive of activity on all levels.

Hosting the Exporters EC members during a site tour of the massive BKB warehouse was BKB Logistics Manager Rabe Nortje.  With 34 auctions held per year by BKB and ramping up towards the busiest time of the year in December, the wool industry was currently doing well, according to Nortje.

“There is a good balance of supply and demand, with no stockpiles worldwide. Wool and mohair are currently trading at good levels. A major market for our wool is China,” said Nortje.

BKB handles a big portion of the wool clip in South Africa: this averages 30 000 000 kg’s of wool per season, amounting to 200 000 bales, which are sold and shipped to markets across the world.

The Site Tour included BKB’s quality testing facility, of which work is outsourced to the Wool Testing Bureau (SA). Exporters EC members also viewed the sorting facilities of BKB, offered as an additional service to producers.

Motor Industry Customs Brokers (MICB)’s Allan Corbett said the tour made him realize that BKB’s head office was much bigger than what he originally thought. “Seeing the process from receipt to the wool being dispatched for shipping was very interesting,” said Corbett.

A typical week at BKB involves auctions on Wednesdays, where-after shipping instructions are received from the buyers.

World Net Logistics’ Teresa van Vuuren, who also attended the tour, said it was fascinating to see how the different departments processed the wool before shipping takes place.

Exporters EC Committee Member Jane Stevenson thanked BKB for opening their warehouse doors to the members and encouraged members to attend the final two events of the year.